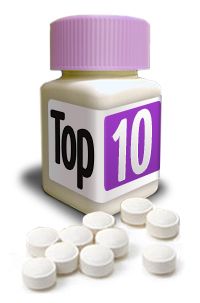 Few caregivers are more devoted than parents when caring for a child. Yet, even the most cautious and educated parents will make mistakes when giving medicine to children or fail to protect children from accidental poisonings. Dangerous mistakes with medicines are three times more likely with children than adults, and more than half of all accidental poisonings—mostly with medicines—occur in children less than 5 years old. The list that follows, although not inclusive, covers 10 important safety tips for parents.

In 2008, drug companies voluntarily removed over-the-counter (OTC) cough and cold products for infants and children less than 4 years old due to safety concerns. The safety concerns were based on reports of seizures, rapid heart rates, loss of consciousness, and death. These products contain decongestants (ephedrine, pseudoephedrine, or phenylephrine) and antihistamines (diphenhydramine, brompheniramine, or chlorpheniramine). Later in 2008, companies relabeled cough and cold medicines to say that the products should not be used in children less than 4 years of age. For children 4 years and older, do not give more than the recommended dose and stop the medicine if it makes the child sleepy. Only give your child cough and cold medicine with active ingredients that treat your child’s specific symptoms. Be careful not to exceed the recommended daily dose of these active ingredients. Do not give your child other medicines that contain additional doses of the same medicine.

2. Don’t give your child acetaminophen prior to receiving vaccines.

Vaccines can cause fever and mild pain at the needle injection site. In anticipation, parents may want to give their child a dose of acetaminophen before they get vaccinated. However, vaccines are less effective in children who have been given acetaminophen prior to vaccination. 1 Only give children acetaminophen, as recommended by your child’s doctor, after receiving a vaccine, if they develop a high fever (100.4 degrees in infants 3 months or younger, 102 degrees in children older than 3 months). Contact the doctor if the child’s fever does not go down after receiving acetaminophen. Use a cold compress on the needle injection site as needed to reduce pain. If pain worsens or the injection site becomes red or swollen, contact your child’s doctor.

3. Don’t use over-the-counter medicines to treat diarrhea in young children.

Don't use over-the-counter anti-diarrheal medicines (e.g., Pepto-Bismol, Kaopectate, Imodium) in young children unless recommended by your child’s doctor. Medicines to relieve diarrhea, such as Pepto-Bismol and Kaopectate, may contain bismuth subsalicylate, magnesium, or aluminum, which can be harmful to infants and toddlers because they can quickly accumulate in young children’s bodies. These medicines may be used in older children, but ask your pediatrician or read the Drug Facts label first for directions. Pepto-Bismol’s packaging directs you to ask a doctor before giving to children under 12, and Imodium’s packaging says to ask your doctor before giving to children under 6.

Giving your baby a smaller dose of medicine meant for an adult or older child is dangerous. Children are not merely mini-adults who can take smaller doses of adult medicine. Adult medicines are formulated specifically for an adult body. Children’s bodies are less developed. An adult medicine could work very differently on them or cause serious side effects. Also, many adult medicines contain more than one active ingredient (such as cold and flu remedies that contain a pain reliever and an antihistamine), and one or more of those ingredients may be unsafe for children. Always look at the minimum age recommended for taking the medicine and don’t give it to your child if he or she is younger than the recommended age until you discuss it with a physician.

5. Know how to measure liquid doses of medicine.

Approximately seven out of ten parents make mistakes when measuring doses of liquid medicines, particularly when using dosing cups that come with OTC medicines.1 More than one-third of the mistakes are large overdoses, which are serious in children. The errors are most often due to: 1) confusing teaspoon with tablespoon, especially since the markings “tsp” and “tbsp” look similar; 2) confusing mL (milliliters) with teaspoons; and 3) assuming that the entire dosing cup is the correct dose. If your child’s medicine does not come with a measuring device, or if it comes with a dosing cup, ask your pharmacist to recommend an oral syringe to use. Before leaving the pharmacy with a prescription or OTC liquid medicine, verify with your pharmacist that you know how to measure the correct dose. Never use a household teaspoon or tablespoon to measure the dose—both are inaccurate.

6. If a child spits liquid medicine out, don’t give another dose unless directed by a doctor.

While giving a liquid medicine to a squirming child, the parent and child might both end up wearing part of the dose of medicine. Or, the child may vomit shortly after taking the medicine. Although you may doubt the child has swallowed and kept down enough of the medicine, giving another full dose could be dangerous. It is best to call your child’s doctor or your community pharmacist, who can let you know whether you should give your child another dose of that medicine.

7. Be alert to the countless ways in which children can access medicines.

A 2-year-old child died after putting a used patch containing a powerful pain reliever, fentanyl, in his mouth. The patch was picked up on the tires of the boy’s toy truck while playing on the floor in his grandmother’s room in a nursing home. He found the patch the next day and put it in his mouth, which caused him to stop breathing. A 4-year-old child died after finding a used fentanyl patch in a trashcan and placing it on his body. A toddler sat on a patch that fell off a family member and it stuck to her upper thigh. Another child removed a patch while his grandmother was sleeping and put it on himself like a Band-Aid. While taking a nap on his mother’s chest, a 15-month-old awoke and removed a fentanyl patch from his mother’s chest and ingested it, leading to his death. Care must be taken if using patches around children. Placement of any medicine patch must be verified frequently to ensure it has not inadvertently fallen off. Tape can also be used on the edges of the patch to help it stick to the skin.

Children have been exposed to hormone medicines after skin-to-skin contact with a person using a topical product such as AndroGel (testosterone). This hormone causes children, ranging from 9 months to 5 years, to have such symptoms as enlarged reproductive organs, increased sexual feelings, growth of pubic hair, advanced bone age, and aggressive behavior.

A young child found a bottle of Tambocor (flecainide) in the refrigerator and drank most of its contents through a twist-on bottle adaptor used to help his parents measure each dose. Bottle adapters should be replaced with a child-resistant cap after each dose is prepared.

Two in every ten medicine poisonings in children involve grandparent’s medicines, often found on a shelf or tabletop at the grandparent’s house, in a suitcase, in a weekly or daily pill holder, or in grandmother’s purse1.

Reference 1) McFee RB, Caraccio TR. “Hang up your pocketbook” – an easy intervention for the Granny Syndrome: grandparents as a risk factor in unintentional pediatric exposures to pharmaceuticals. JAOA. 2006;106(7):405-11. Accessed at: www.jaoa.org/cgi/content/full/106/7/405.

8. Store medicines in a single location up and away and out of reach of children.

Select a single, secure area to keep all medicines, rather than having them scattered in different bathrooms, medicine cabinets, bedrooms, and closets. Bathroom cabinets and kitchen cabinets above the stove are not good because of the heat and humidity, which can make medicines become less potent more quickly. In a 2010 study that used home visits to understand medication errors in children, homes that did not have a centralized location for medicines were more likely to experience medication errors.1 Thus, all medicines should be kept in one location that is up and away and out of reach of children. Visit www.upandaway.org to learn more.

9. A child-resistant cap on a medicine bottle does not mean its child-proof.

If you have young children or grandchildren, you are probably used to being on the lookout for danger in your home and the child’s play areas. But don’t let your guard down with medicines that come with a child-resistant cap. Sometimes it’s tough for adults to open these caps, but children as young as 1 year have opened them in seconds. In 2011, a 13-month-old boy died after ingesting Suboxone (buprenorphine and naloxone) tablets in a medicine bottle. His parents allowed the child to use the bottle of medicine as a rattle, believing he could not open the child-resistant cap. According to the Consumer Product Safety Commission, child-resistant caps have to keep out only 80% of children under the age of 5. More than a million children are poisoned each year, many by household products and medicines that were in child-resistant containers.

Never tell your child that liquid medicine is a special drink or juice, or that solid medicine is candy. Most children’s medicines are made to taste good so children will take them—a tactic that can work too well. However, even if the medicine tastes bad, don’t let your guard down. Children have been known to drink a whole bottle of medicine that tastes just awful! Always mark the level of liquid medicines after each use by drawing a line on the label. Then, if a child drinks the contents, you’ll know how much is missing. This information will help determine if emergency care is needed.