Heart risk are lower for naproxen than ibuprofen

Aspirin, also known as acetylsalicylic acid, is one of the most common medicines used worldwide. Aspirin is a medicine that treats pain, inflammation, and fever. When taken daily, aspirin in lower doses has been shown to be helpful in lowering the risk of heart attack, clot-related strokes, and other blood flow problems.

Aspirin is available alone and is also frequently used as an ingredient in other over-the-counter (OTC) and prescription products (see examples below). When choosing an OTC product, it is important to read the Active Ingredients section of the Drug Facts label to see if the product contains aspirin or an aspirin-like ingredient (listed as acetylsalicylic acid). Prescription products may also contain aspirin, which may be abbreviated as ASA on prescription labels.

Aspirin, also known as acetylsalicylic acid, is one of the most common medicines used worldwide. Aspirin is a medicine that treats pain, inflammation, and fever. When taken daily, aspirin in lower doses has been shown to be helpful in lowering the risk of heart attack, clot-related strokes, and other blood flow problems.

The recommended dose of aspirin for adults varies according to the disease being treated. Typically, adults can take between 325 mg and 650 mg every 4-6 hours to relieve pain or inflammation, or to reduce fever. The maximum dose per day is 4,000 mg, unless otherwise instructed by your doctor. To prevent heart attack and stroke, the typical dose is 81 mg once daily.

Bleeding is associated with aspirin because it inhibits clotting. The risk of bleeding is influenced by how much aspirin is taken, how long it is taken, the use of other medicines that effect bleeding, and individual susceptibility. Other common side effects include irritation of the stomach, nausea and vomiting, and heartburn. Most bad side effects, including bleeding, occur when high doses of aspirin are taken and are rare at low doses. Rare but serious side effects include bleeding, ringing in the ears, confusion, drowsiness, rapid heartbeat, rapid breathing, and stomach ulcer. A very large overdose can result in convulsions and coma.

Aspirin was first isolated from willow tree bark in the 1800s and was the first nonsteroidal anti-inflammatory drug (NSAID) on the market. Although NSAIDs, including aspirin, are widely used to treat pain, inflammation, and fever, the US Food and Drug Administration (FDA) warns that, with the exception of low-dose (81 mg) aspirin, taking NSAIDs long-term can increase the risk of heart attack and stroke. Patients are advised to take NSAIDs for the shortest time period possible.

Aspirin and other NSAID allergies are present in about 1% of the population, but those with asthma are at higher risk for an allergic response. An allergic reaction usually happens within a few hours of taking the medicine and can be mild or life-threatening. Symptoms may include skin redness, itching, and hives; tongue and lip swelling; wheezing, coughing, runny nose, and difficulty breathing; and anaphylaxis (life-threatening breathing and blood pressure symptoms).

Avoid use in children

Parents and other caregivers should never give a medicine containing aspirin to a child or teenager who has or is recovering from chicken pox or flu. A rare, but serious illness called Reye's syndrome is associated with aspirin in children and teens. For a list of drugs containing aspirin and aspirin-like products, the National Reye's Syndrome Foundation has compiled a list here. 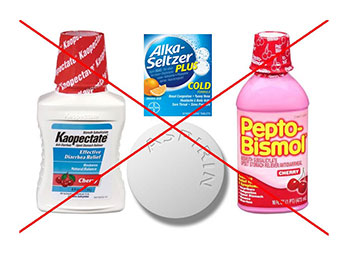 The following tips on taking medicines with aspirin and aspirin-like substances are provided, with permission, from the Consumer Healthcare Products Association (CHPA).

When using aspirin-containing medicines, it is important to know that:

You should carefully read and follow the label directions.

You should not take more medicine or for a longer period of time than the label instructs unless instructed by a doctor.

Do not use if:

You are allergic to aspirin or any other pain reliever or fever reducer.

You are a woman in the last three months of pregnancy unless your doctor specifically tells you to. Problems in the unborn child or complications during delivery may occur.

Tamper-evident packaging features such as seals, locks, and films are not clear or seem broken.

Ask a healthcare professional before use if:

You drink three or more alcoholic drinks a day.

You have stomach problems that last or come back, such as heartburn, upset stomach, or stomach pain; ulcers; or bleeding problems.

You are pregnant or breastfeeding. Women in the last three months of pregnancy are specifically told not to use aspirin or any other NSAID (naproxen sodium, magnesium salicylate, ibuprofen, or ketoprofen) without a doctor’s permission.

You are considering starting an aspirin regimen. You should not take aspirin for any other reason than what it says on the label unless under the advice and recommendation of a healthcare professional.

Stop use and ask a doctor if:

You have signs of stomach bleeding, such as if you feel faint, vomit blood, have stomach pain or upset that lasts or does not get better, or if you have bloody or black stools.

Redness or swelling is present in the painful area or if any new symptoms appear.

You hear ringing in your ears or if you begin to lose your hearing.

You take too much. Immediately contact a doctor or the Poison Control national helpline at 800.222.1222.

If you have questions about any of the medicines you are taking or if you have any unexpected side effects, talk to a healthcare professional. And of course, keep all medicines out of the reach and sight of children.