Insulin pens have become a popular way for diabetics to give themselves insulin. Insulin pens are available for multiple insulin types. However, as with any technology, pens can be misused leading to medication errors and inaccurate administration of insulin. Although an insulin pen is easy to use, certain precautions must be taken to assure proper use.

Below is a list of safety tips to keep in mind when using an insulin pen:

Insulin pens should never be used for more than one person. Using insulin pens on more than one person puts people at risk for infection with blood-borne pathogens such as hepatitis viruses and HIV, which causes AIDS, the agency warns. Infection can occur even if an insulin pen's needle is changed. We are aware of this happening in hospitals, where, for example, a nurse may not realize the risk.  Pen needles are changed in between patients but the very same pen is used for multiple patients! This is dangerous because even if the needle is changed, it's still possible for insulin in the pen to become contaminated. Then, when subsequent patients are injected, there's a danger of passing along harmful bacterial or virus.

2. Do not withdraw insulin from an insulin pen cartridge

Using insulin pens as "mini" insulin vials, by drawing up insulin into an insulin syringe, can lead to inaccurate dose measurement the next time the insulin pen is used for dose delivery. The reason for this is related to air entering the pen unintentionally, interfering with the proper mechanics of the pen.

3. Do not leave an open needle attached to an insulin pen

4. Insulin pens must be stored at room temperature

Every time you use a pen containing NPH (neutral protamine Hagedorn) insulin, it must be rolled between the palms 10 times and then tipped up and down 10 times to mix the insulin properly. The same mixing process is needed for pens with mixtures of NPH insulin and Regular insulin (e.g., 70/30, 75/25, etc.). The insulin should look uniformly cloudy or milky after mixing. If there are clumps floating in the insulin, or white particles stuck to the bottom or sides of the pen giving it a frosted look, don't use it. Otherwise, large doses of insulin can come out during the first injection, leaving less in the pen for injections that follow.

6. The way that insulin pen needles are used may differ

The introduction of insulin pens has risen sharply in recent years and allows patients to inject their insulin in a convenient, discrete and relatively easy to use way. The needles used with most pens are interchangeable and are sold separately. But the way they are used may differ between needle brands. Consumers must be aware because using different and unfamiliar insulin needles can cause an error with your treatment.

For example, patients who are familiar with the NovoFine Autocover must remove a needle shield to inject. Then after injection the needle is withdrawn and automatically covers itself so it cannot be used again. But a pen needle that’s available from BD requires that two covers be removed (see figures 1 and 2). If you don’t remove the second cover no insulin will be injected.

Patients who use Autocover devices and then switch to standard pen needles must be educated about the need to remove both caps. Removing the gray cap is an extra step that is not required with the NovoFine Autocover needles.

Errors have also occurred with the BD AutoShield Duo pen needles which resulted in failure to deliver insulin. The BD AutoShield Duo pen needle is a safety pen needle with shields on both ends of the needle to prevent needlestick exposure during injection and disposal. The shield closest to the patient retracts when the pen and the needle are pressed against the patient’s skin. Afterwards, the shield slides back over the needle, locks into place, and a red indicator becomes visible (figure 1). If the pen is not pressed hard enough (and the white shield is not flush with the skin), the cover will not retract enough resulting in no insulin delivery. Failure to delivery insulin can also occur if the user injects the insulin on an angle that does not allow the retraction mechanism to work properly. Current insulin delivery recommendations note that the pen needle must be injected into the skin at a 90 degree angle, with no skin fold pinch for 4-5mm needles, or with a skinfold pinch for longer needles. Proper demonstration of the BD AutoShield Duo pen needle can be viewed here.

If you are using an insulin pen for the first time, or recently switched to a new insulin pen, errors can occur when dialing the correct dose.

A patient accidently injected too much insulin when she accidently over dialed her insulin pen. The patient using a NovoLog FlexPen gave herself 46 units of NovoLog, not 6 units as prescribed. In error, the patient read the numbers to the right of the dose indicator window not within the window. 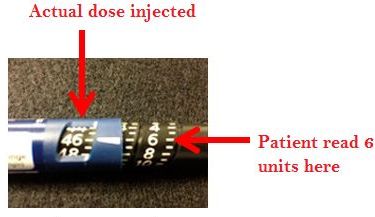 A Lantus Solostar pen was prescribed for a patient who only had prior experience administering Lantus from vials using insulin syringes. The patient was not counseled before using the pen and assumed he understood how to use it correctly. However, he misunderstood how the insulin pen worked and accidently administered 225 units of Lantus instead of 75 units. 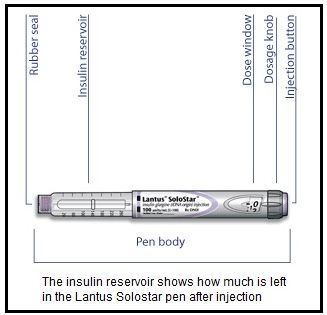 The error was related to a minor difference in how this particular insulin pen works. The Solostar insulin pen looks like a syringe, or other pen devices. Normally during an insulin injection, the syringe plunger moves all the way to where the needle attaches to the syringe. However, the Solostar pen is not designed to deliver the entire amount of insulin in the reservoir. Therefore, the plunger only moves partially, resting on a reservoir scale that shows the remaining quantity of Lantus in the pen. The patient, who expected the plunger to move like a typical syringe, didn’t notice the subtle movement and repeated the injection three times, delivering 75 units each time.

If you are new to using an insulin pen, always demonstrate to a health care professional how you will measure and administer the dose.

Our organization is aware of at least two cases in which improper injection technique led to elevated blood sugars. In both of these cases, ongoing elevated blood sugars led the healthcare provider to investigate the insulin injection technique. After direct observation of the individual injecting the insulin, a crucial error was detected. In both incidences the person injecting insulin correctly dialed up to the prescribed amount of insulin units using the Lantus Solostar (insulin glargine) insulin pen. The person then properly completed the next step and injected the needle into the skin. However, instead of pushing the purple button at the end of the pen to inject the insulin they twisted the dial back down to zero. By dialing back down to the zero, they had believed the twisting mechanism was injecting the insulin. The Lantus Solostar insulin pen is designed to be twisted "up or down" until the user has established the correct amount of insulin to inject. But the button must be pushed to inject the insulin. Both patients in this example had in fact not been receiving any insulin as a result of this error. 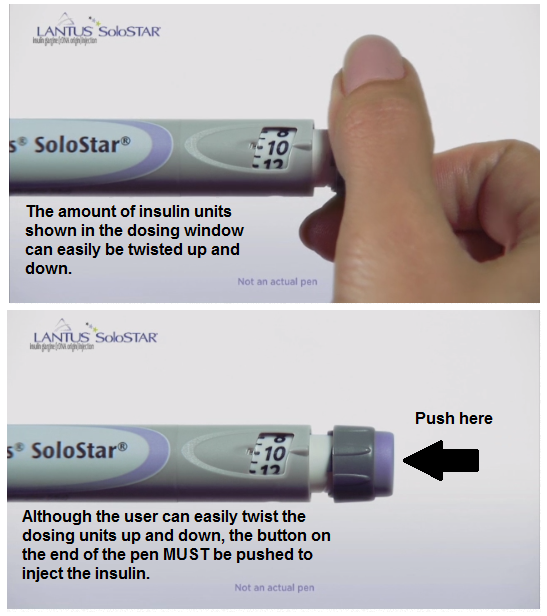 The ability to dial up and down on the insulin pen is not just unique to the SoloStar pen. Other insulin pens also have this feature. If you or a family member is using an unfamiliar insulin pen, be sure to first demonstrate to your healthcare provider how you will be using it.