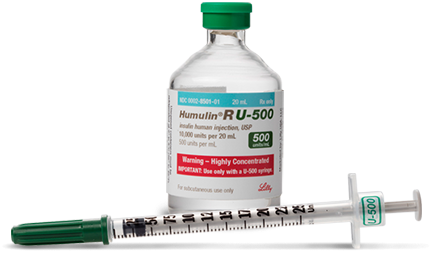 Humulin R is the brand name for Eli Lilly's recombinant human regular insulin. The usual version of Humulin R is U-100 and contains 100 units of insulin activity per 1 milliliter (mL) of fluid. But there's also a version called U-500. The U-500 insulin is 5 times more potent than U-100 insulin. U-500 insulin contains 500 units of insulin activity per 1 milliliter of fluid. People may need to use U-500 if their diabetes is not well-controlled with U-100 or another strength such as U-200 and U-300. The U-500 version should be used only for patients requiring doses above 200 units a day.

Important information about U-500 insulin

Since the use of U-500 insulin is not as common as the use of U-100 insulin, some health professionals may not be aware of it. This by itself increases the chance of dispensing errors.The main problem with U-500 insulin is the risk of a mix-up between the insulin U-100 and insulin U-500 versions. If this occurs, it can result in very dangerous low blood sugar or very high blood sugar levels. A mix-up between the two insulin concentrations may occur if doctors or pharmacists select the wrong concentration (for example, selecting the U-500 regular insulin from computer screen instead of U-100). Sometimes the two concentrations appear one line apart on the computer screen, which sets up the possibility of selection errors. Depending on the screen size, the prescriber may see only the first few words of the product listing, so the drug concentration is not seen. Prescribers may assume the patient needs U-100 and may not even look for the concentration on the screen.

A mix-up may also occur if U-100 insulin and U-500 insulin are stored next to each other at the pharmacy, in the hospital or even in your home. Although the colors of the vials are different, if someone is not aware to look out for the concentration on the vials, the vials could be confused for one another.

If you are uncertain how to use the new syringe, ask your pharmacist, doctor, or office nurse.

Individuals who use insulin must be aware of the concentration and insulin type that you normally use. If you see U-500 on the label when you are supposed to be getting U-100, or if the opposite is true, make sure you question your pharmacist or doctor before taking it.

Also, if another individual in your home also uses insulin that is not the same concentration as yours, store the insulin in different areas. This way you will not inadvertently grab the wrong vial.

If you are to be hospitalized and you use U-500 insulin, be sure to clarify this with the medical staff. It is recommended to bring whichever syringe you use at home to the hospital and demonstrate where you normally draw up your insulin to.